Legend of the Fall (Cleanup) 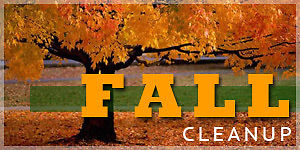 I emerged from my basement for a moment at mid-day to enjoy a short lunch break after a busy morning of helping to drive America’s economic engine.

At the end of my driveway, I saw a lone representative from the landscape company we hired to do our fall cleanup and mulching who was struggling mightily to hoist a large tarp full of limbs, weeds and ornamental grass into the bed of his truck to haul away. Five minutes went by as I witnessed him make a variety of attempts to load it – all creative but unsuccessful.

As I sat there watching, there was a fierce debate going on inside of my head about whether or not I should go out to assist him. If I help him, will he be offended that I don’t think he can do it himself? Will he think that I’ve been watching him from inside since he arrived? Will he expect me to help him with any future heavy lifting as he hauls the rest of it or spreads mulch? What if I’m so weak that we still can’t load it on the truck with me helping him? How embarrassing would that be for both of us?

I sat there watching with those (and similar) questions running through my head until I saw him make one last unsuccessful attempt. He threw his hands up in the air and kicked the bag repeatedly in frustration. I knew that at that point, it was time for me to spring into action.

I quickly slipped my crocs on and exited the front door. The overcast skies burned my pale skin (on account of the fact that I rarely leave my house these days) as I confidently strode across the lawn offering my name, a firm handshake, a notice that I just happened to SEE him but that I was not WATCHING him and an offer to help load the bags.

He seemed glad to see me and took me up on my offer. I took the heavy side and he took the light side and we easily picked it up and threw it in the bed of the truck – no problem. He thanked me and I provided the reasons that I will no longer be able to help him because lunch time is over. He seemed ok with the idea that we would each be returning to our separate roles as we bid farewell and I returned to my desk downstairs.

I’m not sure there’s a point to any of this but I guess if I’d be forced to summarize my points, they would be as follows: 1) despite my sedate lifestyle, I am still relatively strong and capable of landscaping jobs in short bursts with plenty of rest in between and 2) it may not be an instant reaction but when I see a man about to lose his religion over something I can help with, I will eventually offer to help and 3) I don’t WATCH men from my house, I just SAW the guy – I want to be very clear about that.