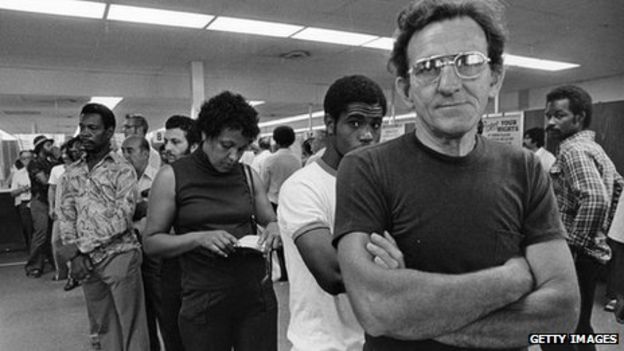 Immediately after doing my 4 year stint in the military, I worked as a VA work study student at the Florida Jobs & Benefits Center. Helping military veterans find jobs was fulfilling work and I really enjoyed my coworkers there.

I saw some pretty sobering things during my time in that job (such as a man intentionally setting himself on fire and watching my boss spray him with a fire extinguisher – the man later died in the hospital) and witnessed some pretty heartbreaking stories that stick with me to this day (a pretty, young woman who was deaf and had trouble communicating in part because her own mother hadn’t bothered to learn sign language and the homeless veteran unemployed construction worker with HIV).

Beyond those things, the thing that I always remember is this perpetually unemployed man who would come in to do job searches on the computer. Every day I’d say, “How’s it going, Charles?” He’d ALWAYS reply with “Another day, another buck two ninety five.” I had never heard that before, haven’t heard it since and never thought to ask him what he meant by that but I always uttered some sort of cliche right back at him. I secretly suspected that if he said that during job interviews, it most likely bewildered the interviewer and resulted in an unfavorable outcome for him, but i figured I had no right to question him on it and it was a sense of personal enjoyment and satisfaction for me to have this unusual daily exchange with him.

To this day, when someone asks me how it’s going, I’m always tempted to say, “another day, another buck two ninety five” but I restrain myself so that I assimilate into the workforce and overall society.